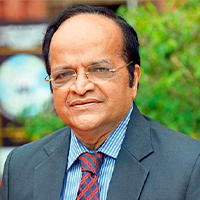 He has been at the helm of affairs of many higher educational and scientific research establishments for 50 years as a teacher, researcher, professor, and executive head of Education, Science and Technology establishments in the country and abroad.

An Elected Fellow of the Indian Academy of Sciences, Prof. Rajasekharan Pillai is one among the top-cited Chemistry researchers in the country. He created an internationally renowned research group in the area of Polymer Science.